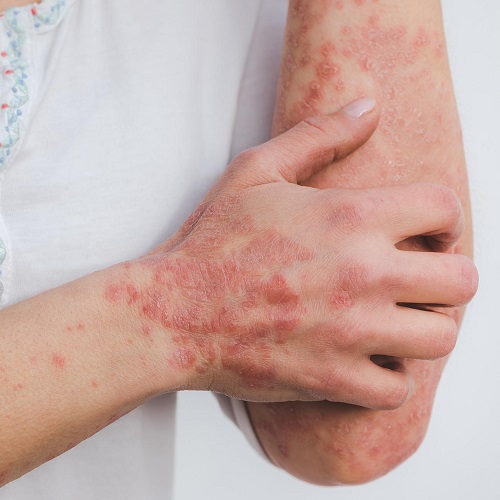 More than a million people in the UK are living with psoriasis. This condition can affect anyone and can have a major impact on self-esteem. Whilst not contagious, many people with the condition want to understand psoriasis causes. By doing do, they can avoid making their condition worse.

Psoriasis is a chronic skin condition. It involves the body producing more skin cells than are needed, causing them to build up into patches of flaky skin. These patches then form scales.

The patches of skin can look pink or red, with white or silvery scales, on brown, black, and white skin. On brown and black skin, the patches may also appear purple or dark brown. The scales can look grey.

Psoriasis can affect all places on the body, but the patches most often appear on elbows, knees, scalp, or the lower back. People living with psoriasis do not always show symptoms. Rather, the condition occurs in cycles. Sometimes, the person with the condition will have very small patches or even none at all. However, at other times the patches will be widespread and can be itchy or sore.

Many people with psoriasis develop pain, tenderness, and swelling in their joints and connective tissue. This is known as psoriatic arthritis.

Currently, it is thought that psoriasis is caused by irregularities in the immune system. The immune system starts to attack healthy skin cells by mistake, which causes the deepest layers of skin to form new skin cells too quickly. Because the immune system is attacking skin cells, it increases its output to attack the new cells. The cycle continues from there, resulting in flakes and scales on the top layer of skin.

However, it has been found that most cases of psoriasis are triggered by an event. People with psoriasis will often find that certain triggers also worsen their condition.

Psoriasis runs in families. The exact genes responsible for causing psoriasis have not been identified. In fact, researchers say there are multiple genes linked to the condition. However, if someone in your close family has the condition, then you are more likely to be vulnerable.

Having these genes does not guarantee that you will develop psoriasis. As a result, there is still more research needed into psoriasis causes.

As mentioned above, for many people with psoriasis, there was often an event that caused their first outbreak. Once the condition has been identified, avoiding these triggers can prevent it from becoming more severe.

Sometimes psoriasis is worsened – or caused – by damage to the skin. This can be something as small as a pinprick. The psoriasis patch will develop around the damage and may irritate the wound. In some cases, even a sunburn can trigger this response.

One of the most common psoriasis causes is stress. This can be difficult to prevent, as stress is present throughout our daily lives. However, many people with psoriasis claim to have developed it during times of emotional upheaval, such as a break-up or the loss of a loved one.

Stress also causes psoriasis flare-ups, which then cause more stress. This can seem like a vicious cycle. People living with psoriasis are encouraged to try stress-relieving activities such as meditation or yoga.

Several studies have shown that there is a link between psoriasis and smoking. Whilst the exact nature of this connection is unclear, there is strong evidence to support the hypothesis that smoking increases the likelihood of developing psoriasis. These same studies suggest smoking also contributes to more severe symptoms.

Some theories say that smoking damages the communication between cells. This results in the immune system mistaking skin cells for threats. Alternatively, smoking stimulates certain receptors in our DNA, activating the genes responsible for psoriasis.

It is thought that oestrogen levels can impact the speed at which skin cells reproduce. Therefore, the changing hormone levels that occur during menstruation also impact the severity of psoriasis. For many people who menstruate who live with psoriasis, where are often flare-ups in the lead-up to their period.

Psoriasis is a chronic condition, and there is currently no cure. Instead, symptoms occur in cycles. For a period of weeks, a person living with psoriasis might show no symptoms at all. At other times, it may affect much of their body. The main treatments for psoriasis involve using creams on the areas of affected skin. However, stronger treatments are available.

These include phototherapy, which uses natural and artificial light to slow down the development of skin cells. It is worth noting that phototherapy is not the same as using a sunbed and should only be performed by professionals. Alternatively, there are certain medications that can be used to treat psoriasis. Some are administered orally, whilst others are injections.

The Psoriasis Association have a comprehensive list of psoriasis treatments.

Telecare Choice provide personal alarms for elderly, disabled, and vulnerable people so that they can remain safe and secure in their own homes. A personal alarm allows you to request help at the press of a button. When the alarm is activated, our Monitoring Team speak to you through the loudspeaker to find out what support is needed. They then inform emergency contacts and, if necessary, the emergency services.

You can find out more about Telecare Choice alarms by reading our quick guide. Our alarm packages start at as little as £12 per month. Order your Telecare Choice personal alarm today.